When the head of the National Transportation Safety Board called for states to pass tough new laws banning drivers from using cellphones or hand-held devices, she said: "No call, no text, no update, is worth a human life."

While Tuesday's statement by NTSB Chairwoman Deborah Hersman is undeniable, there are those who question the advisability of such a ban. Some state lawmakers and transportation experts say it could be difficult to enforce and that there's no real evidence yet that existing laws on hand-held devices have significantly reduced accident rates.

The curious thing is that even as cellphone use has increased exponentially by drivers in vehicles, we see no surge in crashes.

"To date, no state has taken the steps that the NTSB is suggesting," says Jonathan Adkins, communications director for the Governors Highway Safety Association.

The NTSB's recommendation, which is not binding, called for a ban on all portable electronic devices, including hands-free devices, while driving except in emergencies. The sole exception would be devices "designed to support the driving task," such as GPS devices.

Current state laws on cellphone use are a patchwork. Connecticut, New Jersey and Delaware, for example, have some of the strictest laws, banning hand-held devices, cellphones and texting behind the wheel, while states like South Carolina, South Dakota and four others have no ban at all. Local governments may have their own laws.

South Carolina Rep. Bakari Sellers, who has tried unsuccessfully for about four years to ban drivers from using hand-held devices in his state, says the main argument against it revolves around individual freedoms.

"We are a very conservative state that borders on libertarianism," says Sellers, a Democrat. "Not a safety argument, but an argument that the government is trying to take away our rights."

While he applauds the NTSB's proposal for its substance, he thinks it will sink his efforts at home because it has the imprimatur of the federal government.

"It will seal any chance of passing this in South Carolina," he says, chuckling.

That sort of us-against-them attitude is shared by many people in South Dakota, says Republican state Rep. Betty Olson, who has opposed efforts to implement a ban in her state.

She doubts the NTSB's recommendations will cause any of her fellow lawmakers to seriously reconsider the issue. "Most of us don't pay much attention to what the feds are doing," she says. "We're kind of an independent bunch out here."

Olson, a former emergency medical technician, has seen plenty of automobile accidents, most of them attributable to "distracted driving" — of all kinds. That's already against the law in South Dakota, she says, so there's no need for a specific ban to target cellphones and hand-held devices.

"I think using a cellphone while driving is stupid," Olson says. "But the last thing the cops need is another law to try to enforce."

Since Delaware's ban went into effect in January, police officers have issued 9,000 citations for cellphone use while driving, says Sgt. Paul Shavack, a spokesman for the Delaware State Police. During the same period, there have been 139 accidents in which cellphones were cited as a distracting factor, one of which was fatal.

Shavack says the law can be tough for officers to enforce "because it's hard to tell if the driver was using a cellphone unless he or she admits it or a witness says it's happening."

He also notes that it's too soon to know whether the ban has had any effect on the number of accidents. "That might take three years of data," he says.

A National Highway Traffic Safety Administration pilot program in Hartford, Conn., and Syracuse, N.Y., suggested that a combination of aggressive public service advertising ("Phone in One Hand, Ticket in the Other") and stepped-up enforcement can reduce the numbers of distracted drivers, if not the number of accidents.

Each city received $200,000 in federal funds and $100,000 in state funds last year to test whether a crackdown would work. It did. Officials in Hartford say cellphone use and texting declined by a third during the enforcement period. In Syracuse, handheld use dropped by more than one-half and texting by nearly three-quarters, officials report.

"The success of these pilot programs clearly shows that combining strong laws with strong enforcement can bring about a sea change in public attitudes and behavior," says NHTSA Administrator David Strickland.

Russ Rader, a spokesman for the Insurance Institute for Highway Safety, agrees but says there's just one problem: "We don't know if [the demonstration project] had any effect on crashes — and that's a key measure."

The institute's own study shows that states with cellphone bans have seen no real decrease in accident rates.

"The curious thing is that even as cellphone use has increased exponentially by drivers in vehicles, we see no surge in crashes," Rader says. "So as this trend has accelerated, with more and more people having phones in their cars and using them, the number of overall crashes has been declining."

Cellphone use behind the wheel is no doubt a dangerous distraction, Rader says. But the overall problem of distracted driving is much bigger — it's about fiddling with the car radio or eating a sandwich as much as it is cellphones, he says.

Adkins of the Governors Highway Safety Association acknowledges that there is no evidence proving that state bans reduce crashes.

Adkins says even though his organization hasn't decided whether to support the NTSB's proposal, "we understand it and think it has a lot of credibility." 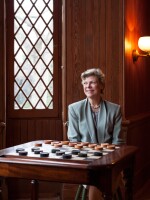