Stop by most any unirrigated farm across the lower Midwest and you'll see crops in distress. Midwestern corn and soybean farmers are taking a beating during the recent drought, but it's not likely to drive many out of business.

Most of those farmers carry terrific insurance, and the worse the drought becomes, the more individual farmers will be paid for their lost crops. The federal government picks up most of the cost of the crop insurance program, and this year that bill is going to be a whopper.

Despite a withered soybean crop that he says won't even let him break even, Loren Alderson, a farmer in Nickerson, Kan., isn't too worried.

"The government has a program of crop insurance, revenue insurance, and it certainly is a lifesaver for years like this," Alderson says.

That's an attitude typical of most farmers affected by this drought, says Bruce Babcock, who specializes in agriculture economy at Iowa State University. They're not too worried because the great majority of them have crop insurance, he says. In the Corn Belt, upwards of 85 percent of farmers carry crop insurance, if you can call it that.

"It's not really insurance, because, as we know, when we buy insurance, we have to pay the full premium," Babcock says, "and that premium covers not only the losses, or the claims that are made, but also the administration and profit for the company."

When a farmer buys crop insurance, the government picks up most of the premium, and it also pays operating expenses for the companies. Those two subsidies cost close to $8 billion a year. But taxpayers also insure crop insurance companies against catastrophic loss.

So, as claims from this year's drought mount, the USDA will shoulder a larger and larger share of the payout. Babcock says it'll likely be taxpayers, not insurance companies, paying the bulk of this year's crop insurance claims, which could easily run more than $10 billion.

"The drought really shows how important the program is, and who's really funding it," Babcock says.

Payouts are going to be extra high because most Corn Belt farmers also carry coverage tied to the changing value of the crops they produce. The drought has cut projected supply and pushed prices way up.

The more bushels of corn that are lost, the more each one of those lost bushels tends to be worth for a farmer's insurance settlement, and the more taxpayers owe drought-stricken farmers.

Of course, taxpayers do expect to eat, even after an agricultural disaster, so, arguably, in that light, crop insurance makes sense, says Tom Zacharias, the president of National Crop Insurance Services.

"It's designed to help the consumer," Zacharias says, "so that we know that we have stable, secure food supply. [And] we want to keep farmers in business from year to year."

So, disaster coverage payments typically arrive in time to cover getting the next crop in the ground and keeping the food system running. But, farmer Loren Alderson says, that's about as far as it goes.

"Technically, you don't lose money," Alderson says, "but if you're especially a younger farmer who's got land payments to make and machinery payments to make, they're not going to be able to make those costs with insurance."

While it will take months to figure the true costs of this rapidly intensifying drought, it is clear there is going to be plenty of pain to go around. 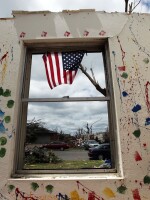