Nor'Easter Deals Extra Blow To Those Without Power

From NPR News, this is ALL THINGS CONSIDERED. I'm Melissa Block.

The nor'easter that slammed into New York and New Jersey yesterday dealt another blow to power companies still struggling in the wake of Hurricane Sandy. In a moment, we'll check in with New Jersey. But first, to Long Island. There, the power authority reported more than 120,000 new outages. That brings the current total on Long Island to nearly 300,000 customers in the dark.

NPR's Steve Henn caught up with a few of them.

STEVE HENN, BYLINE: This morning, millions of New Yorkers woke up to a couple of inches of wet, slushy snow, the kind of snow that quickly turns into icy mud puddles, the kind that weighs down trees and make branches snap.

Joshua Kohn lives in Stony Brook, New York, out on Long Island. He hasn't had power for 11 days now.

So what did you do last night?

JOSHUA KOHN: Ran the generator until about 11:00 at night, which keeps my boiler going, and then, you know, hunkered in and got under the covers and layered up and slept uncomfortably cold.

HENN: And then got to shovel snow off your driveway.

KOHN: Then I had to shovel snow off my driveway, so - which is not an easy task.

HENN: At least you have a generator and some gas, though.

KOHN: At least I have a generator. Gas is complicated because you're waiting on line for about an hour, hour and a half every day still for gas.

HENN: Residents of some of the little towns and villages here that dot the north shore of Long Island were told by the power authority that they shouldn't expect the lights to come back on for another week. These communities didn't flood, but there are so many trees down, so many tangled wires, it's going to take a while. And the nor'easter made it worse.

Donna Leff thought she was one of the lucky ones.

DONNA LEFF: I live in Port Jefferson up on a hill, so we avoided the flood.

LEFF: But we have no heat again.

HENN: I met Leff at the Port Jeff Community Center, warming up. She actually got her heat and lights back on a couple of days ago, but then the wind came back.

LEFF: Yeah. Yeah, I've been doing a lot of knitting by flashlight. And it was fun at first, and then it didn't - it wore off.

HENN: Strong winds here often knock the power out. And in places, it's pretty rural. Erin Smith lives in the Village of Old Field, down a small lane that was covered in downed trees. The village hall here is in a lighthouse.

ERIN SMITH: For us back here, when the power is off - because we're on a well - we don't have water. So we had a couple of days where there was no water and no electricity.

HENN: She has a generator going now and crews have finally reached her house. They're swarming though the woods in bright orange coats with chain saws, huge trucks and cherry pickers.

DALE MORGAN: Over here? You want some slack?

HENN: And these guys, like Dale Morgan, are from Los Angeles.

MORGAN: I figured out rain boots ain't what you use in the snow.

HENN: More than 8,000 power crews have come to Long Island from all over the country.

So how did you guys get out here?

MORGAN: Military plane, military cargo planes, the same ones you see in the movies dropping tanks.

MORGAN: The same one.

HENN: So they flew you and your trucks?

MORGAN: Yeah. Yeah. Yeah, we rode on the little side racks on the plane.

HENN: Have you ever done that before?

HENN: But this was not what Dale Morgan expected when he was told he was going to New York.

HENN: For folks heating their houses with woodstoves, it might be a bit too much like old America. But Morgan says, for him, the cold hasn't been that bad. He got some warmer boots. He has some gloves. And he says the people out here couldn't be happier to see him. 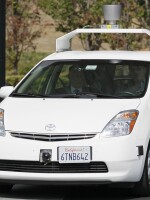