Americans have been adopting Russian children in sizable numbers for two decades, and most of the unions have worked out well. But it remains a sensitive topic in Russia, where officials periodically point to high-profile cases of abuse or other problems.

Now, the two countries are putting the finishing touches on a new agreement governing these adoptions. It will make the process costlier and more time-consuming, but it's designed to address a host of concerns.

Some Russian officials still seem to bristle at the very thought of foreigners adopting Russian children.

In a speech before parliament last month, Pavel Astakhov, President Vladimir Putin's commissioner for children's rights, cited statistics that make the U.S. look like a hotbed of violence against children.

He attacked the notion that Russian orphans will be deprived of a future without foreign adoptions, calling the claim "hysterics" and "lies."

Despite his vehemence, Astakhov is one of the main authors of the new agreement, which seeks to improve the safety and quality of U.S.-Russia adoptions.

In a U.S. case that attracted widespread attention in 2010, a Tennessee woman put her 7-year-old adopted son on a plane back to Russia alone, along with a note saying that he was mentally unstable.

The new rules seek to avoid such incidents by requiring adoptions be carried out only through certified agencies.

"If we look at some of the adoptions that have made the news, they were done somewhat spontaneously — not with accredited agencies," says Linda Brownlee, executive director of the Adoption Center of Washington.

In some of the cases, parents were also not properly prepared to adopt, Brownlee notes. Under the agreement, adoptive parents must attend and pay for a mandatory preparation course, she says, a commitment of time and money that many prospective parents haven't been planning on.

"I have had one family here from our agency in Northern Virginia [that] had to travel within three days to Philadelphia, and spend three or four days in a hotel, so that they would get their education credits," Brownlee says.

Kathleen Strottman, executive director of the Congressional Coalition on Adoption Institute in Washington, says she thinks the preparation courses will pay off.

"We've found over the last several years that children who are institutionalized for long periods of time will have an adjustment period once they come here to the United States," Strottman says. "Often, parents were finding they were unprepared for that."

Ultimately, Strottman says, "parents will be glad they did it."

U.S. adoptions of Russian children have fallen off in recent years. Experts say that's due in part to the uncertain U.S. economy.

But inside Russia, internal adoptions haven't picked up the slack — even though the process for Russians to adopt is free of charge and many regions offer financial incentives for families to adopt.

Anatoly Vasilyev, director of the SOS Children's Village, a children's home on the outskirts of Moscow, says government incentives had prompted an upsurge in the number of children adopted by Russian families.

More should be done, Vasilyev says, to place children in caring families who aren't motivated by money.

Chuck Johnson, president and CEO of the National Council for Adoption in Alexandria, Va., says Russia's political hostility toward foreign adoptions is understandable. He said a similar hostility would emerge in the U.S. if foreigners began adopting American kids.

"That's true in every country, and it's true in Russia," Johnson says. "Even though they have more than 700,000 children in institutional care, even though the polls show that Russian citizens are not interested in adopting them, there's still this tendency to want to keep them there — even though it's in [the children's] best interest to be adopted."

Johnson points out that there are still elements of the agreement that need to be clarified in U.S.-Russia talks that are to be wrapped up this winter.

Overall, Johnson says, he's optimistic that the agreement will end up being a good one — for the children and for families who want to adopt. 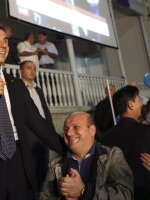