Over the past decade, there has been a dramatic increase in the number of women overdosing. NPR's Patti Neighmond reports.

NEIGHMOND: And the number of women showing up in hospital ERs who've overdosed on opiod painkillers like Vicodin and Oxycontin is also on the rise. It's unclear how many women used medication they obtained illegally and how many were prescribed it. But Frieden says the increase in drug overdoses and deaths directly parallels an increase in prescriptions for pain medication.

Pain specialists Lynn Webster is president of the American Academy of Pain Medicine. He says women often unknowingly end up with medications that, when combined, are dangerous.

LYNN WEBSTER: Because they're often stereotyped as being more emotional or more psychological, and their first line of therapy often is a sedative or something that treats the emotional side, as opposed to the pain.

NEIGHMOND: And if they're later prescribed a powerful opiod to treat pain, the combination can be fatal. In the federal report, older women between the ages of 45 and 54 were at highest risk of abusing pain medication.

WEBSTER: There are more medications that are used at that age. Maybe they've been on medications for a longer period of time. People are very interested in getting back to their lives, and so they're looking for medications to help them get their life back.

NEIGHMOND: CDC director Frieden calls for greater awareness - both in the medical community and among the public - of the risk and potential for abuse of pain medication. Pain experts agree there are alternatives to medication. Acupuncture, exercise and cognitive behavior therapy have all been shown to help patients manage chronic pain. 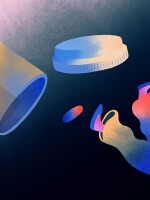