Seeking the Solstice: Kick Off Your Summer of Cosmic Sunsets

From NPR News this is ALL THINGS CONSIDERED. I'm Robert Siegel.

And I'm Melissa Block. Here in the Northern hemisphere, summer officially begins this weekend. The summer solstice is Saturday. Other than warm weather and school letting out, what really marks this moment are sunsets, as NPR blogger Adam Frank explains.

ADAM FRANK, BYLINE: If you want to see for yourself what makes the summer solstice such a big deal, you're going to need to watch some sunsets for a big while. Not a bad assignment, right? But there's more - you're also going to need to pay attention. That's because the cosmic link between the solstice and the Earth's seasons is all about location, location and location.

So pick some spot where you can always see the sun going down and always see some markers on the horizon that state fixed from one night to the next. A mountain or a building or even some trees will do, but the open ocean won't cut it because the trick here is to notice where exactly the sun goes down on the Western horizon over the course of time. So what are you looking for? If you'd started this in January as the winter marched into spring, you'd see the sun drop down over a slightly different, slightly more Northern point every day. Each year as we approach the summer solstice, the northward progression of those sunsets slows down, then it stops, then it turns around.

The sunset starts moving south again as we slide back towards fall and winter, and that's what this weekend is all about. Each year, as the seasons shift from summer to winter, the sun drops over the horizon at points further and further south. But here's the important point - the sun rising and setting further in the south means it's climbing lower into the sky each day and that means less daylight, less warming of the ground and cooler days. And that's the all-important connection between where the sun rises and sets and the progression of the seasons. Now, if you have kids you can get them hooked into all this sunset watching, blow their minds with it by playing into whatever kinds of minds they have. If you have artistic kids, get them to paint pictures of the setting sun with those all-important horizon markers. If their musical kids, get them to write songs about the traveling sun.

And when, after a few weeks and you've watched the sunset's tack like sailboat through interplanetary winds, then you can be their science hero. Then you can recount to them the grand links between sunset, sunrise and seasons. But you got to get out there, you've got to find your spot, you got to mark your calendar, you got to make this your summer of cosmic sunsets. 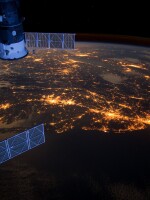 Adam Frank
Adam Frank was a contributor to the NPR blog 13.7: Cosmos & Culture. A professor at the University of Rochester, Frank is a theoretical/computational astrophysicist and currently heads a research group developing supercomputer code to study the formation and death of stars. Frank's research has also explored the evolution of newly born planets and the structure of clouds in the interstellar medium. Recently, he has begun work in the fields of astrobiology and network theory/data science. Frank also holds a joint appointment at the Laboratory for Laser Energetics, a Department of Energy fusion lab.
Latest Stories