Christians living through Syria's civil war face a new threat as an Islamist rebel alliance surges in the country's north. Today, in the heaviest fighting for months, the Islamist alliance launched an attempt to seize the key city of Aleppo from government forces. With backing from U.S. allies, like Turkey and Saudi Arabia, this rebel coalition fights both the Syrian regime and the so-called Islamic State, or ISIS. But the coalition has extremists in its own ranks who have mistreated Christians and forced them out of their homes. NPR's Deborah Amos went to Turkey, to the city Antakya, to meet a priest who was kidnapped by those militants last March.

DEBORAH AMOS, BYLINE: This is a historic neighborhood where organized Christianity began here in southern Turkey - a place once known as Antioch, where Christians trace their roots back to the early church. And across the nearby border in Syria, Christian communities date back centuries. Now Christianity is dying in the Middle East, say church leaders in the region, under threat from militant Islam. Syrian priest Ibrahim Farah saw threat firsthand. Here, he is free to take part in the ancient rituals of worship. In Syria, his church is now shut.

AMOS: In March, when the provincial capital of Idlib fell to a rebel coalition, Islamist militants kidnapped Father Ibrahim. Syria's al-Qaida affiliate, al-Nusra Front, held him for 20 days. Some rebel groups objected, but here's the problem - more moderate rebels had pledged to protect Syria's minorities, even pledged to empower civilians to govern the liberated province. But the militants of al-Nusra made no such pledge and quickly imposed hard-line rules. By the time Father Ibrahim was released, all of the Christians of Idlib - about 150 families - had fled. Father Ibrahim crossed the border to Turkey.

AMOS: He says this is the first time I've come to this church, a symbol of the long history of his faith.

Are these Turkish Christians asking you about Syrian Christians?

FARAH: (Through interpreter) Of course, they're interested. And they ask because they know about the situation in Syria, and we are all Christians in the Middle East. They're afraid. They're very afraid.

AMOS: Are they right to be afraid? Father Ibrahim raises his hand to stop the interview.

FARAH: (Through interpreter) We wish for peace in all of the world.

AMOS: He seems wary of criticizing the militants of al-Nusra and won't talk about his kidnapping. He still hopes the hard-line Islamists can be convinced to allow civilians to run the province. There are growing protests by residents against al-Nusra, and their heavy hand has raised tensions within the rebel coalition.

AMOS: Meanwhile, back at the Turkish church, another Syrian Christian has come here recently for refuge. He's an engineer from Aleppo, Syria's battered northern city, half-held by rebels. He watched the military campaign in Idlib and says the provincial capital fell when the regime rapidly withdrew and rebel forces stormed in and that convinced him to leave his city, fearing the Christian community of Aleppo is the next target for hard-line Islamists. He won't give his name to protect his family's still in Syria.

UNIDENTIFIED MAN: And maybe all of Christians still in Aleppo now think about the exit from Aleppo. And I saw Idlib fall, and I thought about Aleppo.

AMOS: Many in this Turkish frontier town are stepping up an emergency plan for Aleppo, just across the border. Aleppo is likely to be the next battleground as the rebels gain momentum. International aid groups have set up operation rooms to coordinate relief. Aleppo Christians are organizing in the event of a mass exodus, says aid worker Fadi Heliso.

FADI HELISO: If a battle start for Aleppo between the opposition and the regime, we don't know who would manage to control the city.

AMOS: Activists are pressuring moderate rebel groups to protect civilians, but the Islamists are the strongest faction on the ground. Deborah Amos, NPR News, in southern Turkey. Transcript provided by NPR, Copyright NPR. 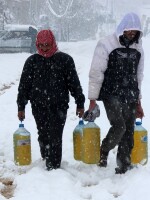