Greitens Coverage
Gov. Eric Greitens announced in late May that he would resign after facing months of political and legal scandals.The saga started in January, when KMOV released a recording of a woman saying Greitens took a compromising photo of her during a sexual encounter and threatened to blackmail her.A St. Louis grand jury indicted Greitens in February on felony invasion of privacy. The woman testified to lawmakers that Greitens sexually and physically abused her, spurring bipartisan calls for his resignation or impeachment.The invasion of privacy charge was eventually dropped by St. Louis Circuit Attorney’s office following a series of prosecutorial missteps before the trial began. Greitens was also accused of illegally obtaining a donor list from the veterans non-profit he co-founded with his political campaign, but that charge, too, was dismissed as part a deal that led to his resignation as governor.

Unlike the Republican presidential debates of the past few months, the four GOP candidates for governor were in agreement for most of the forum held by the Christian County Republican Central Committee on Saturday at the Ozark Community Center.

John Brunner, Eric Greitens, Catherine Hanaway and Peter Kinder were able to state their positions on the economy, agriculture, the proper role of the federal government, education, healthcare and transportation. Here’s a basic breakdown of what was said Saturday afternoon.

Brunner starts by reminding the audience that he is a businessman. He is calling for the scaling back of regulations on businesses and says tort law needs reformed.

Hanaway, former state speaker of the house and former U.S. attorney for Eastern Missouri, agrees that tort law needs to be reformed and has made it part of her five-point plan to reduce regulations on business.

“The first thing I would do, day one in office, is freeze all new regulations,” Hanaway says. “Regulations are smothering our small businesses. I’ll give you just one example: the barber regulation in Missouri is 10,000 words long. The Book of Revelation is 10,000 words long. Surely we can tell a barber how many combs to have in fewer words than it takes to describe Armageddon.”

Both Hanaway and Lt. Gov. Kinder also say passing ‘right to work’ legislation would be on their agendas if elected. By looking at surrounding states, such as Kansas and Oklahoma, which have already such passed bills, Kinder says Missouri could create its own similar laws and become more competitive.

In addition, Kinder is also calling for a review of the state income tax structure.

“Our income tax is too high. It takes money out of the pockets of job creators, and just as they’re on the verge of realizing their dreams and hiring more of their neighbors,” Kinder says.

Missouri agriculture is another area the candidates agree could use less oversight from the federal government.

Greitens, the only candidate who has never run for elected-office, says Missouri can lead the efforts to feed the world, but only if government agencies like the Environmental Protection Agency have less power in the states.

“You talk with farmers all over the state, and they tell you the same thing. They tell you too much of our farmland is sitting idle," Greitens says. “They tell you they worry about the ability of their kids to take on the profession that they and their parents and grandparents have so loved.”

“I would engage in those battles that need to be fought against the federal bureaucracy that is constantly invading what should be state responsibilities—land use planning and all the rest,” Kinder says.

In addition, Kinder says another way to grow the state’s agribusiness would be to increase export markets around the world.

Proper Role of the Federal Government

The candidates each said the same thing on the federal government’s involvement on gun control and state law enforcement: there should be no role at all.

Kinder says Ferguson was a situation where the national government invaded local policing powers, but he says he has stood up to Jefferson City and the White House on this issue.

Brunner says sheriffs, as the front line of defense in the state, are not getting the necessary supplies, support and training and that he would do everything as governor to fix it.

Candidates were asked where control should lie for public schools, at the federal, state or local levels. Hanaway says power at the local level would be best.

“What we need to do is get the federal government out of education,” Hanaway says. “And every time that they try and push another curriculum down like Common Core onto our schools, we need a governor who is willing to stand up and say no.”

Brunner calls education the heart of a community, and says he would promote flexibility of school districts to meet the standard goals.

“When you try and tell people how to do the job, you lose your best people,” Brunner says. “Tell them what you want, set the goals. Bring the power back to the local school districts, back to the superintendents, back to the teachers, back to the parents, and folks, we’re going to see education rise again all across the state.”

Again, the candidates all agree federal funding of Planned Parenthood should be stopped. Brunner says the country is “in a desperate situation since the passing of Roe v. Wade.”

Brunner continues, “My friends, our priorities are all upside down in this country. We need people with those core values that go deep—those roots that will support life, the right to life.”

Both Hanaway and Kinder say there are many health clinics across the state that do not perform abortions and offer better care. Kinder says Planned Parenthood has enough private donors that it does not need taxpayer money.

“It is wrong to ask Missourians to fund this ghastly, grisly business,” Kinder says. “After those videos this summer, you can choose to look away, but you can no longer say you didn’t know what’s going on in the nasty business of Planned Parenthood.”

Candidates were asked how they would address the state’s transportation infrastructure. According to Hanaway, since she left the speaker’s office in 2005 transportation funds have gone up but maintenance of the state’s 33,000 miles of roads and bridges has gone down.

“I want to know, first and foremost, if MoDOT is getting more money, why are they maintaining fewer roads?” Hanaway asked. “So the first thing any governor needs to do is to get inside MoDOT and ensure every penny of your money is spent well.”

Greitens says there is no trust in Missouri’s government to spend and budget well for areas like transportation. He says safety on the roads is one of his priorities.

“First we have to redo the way we do our budgeting right now,” Greitens says. “In Missouri the way that budgeting works is that at the beginning of the year, career politicians get together and they do a consensus revenue estimate, which means they assess how much of your tax money they’re going to take from you and then they figure out how they’re going to spend it all. When I’m governor, we’re going to build a budget that’s based around our priorities”

The Missouri primary is August 2, and the general election is November 8. 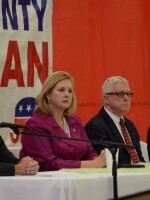 Emily McTavish
Emily McTavish is a senior at Missouri State University majoring in journalism. She is also a photo editor and staff writer for Missouri State’s campus newspaper, The Standard. She hopes to continue to a career in journalism where she can use both her writing and photography skills. She is originally from Wisconsin, loves to travel, cook, bake and take photos of it all.