Good Service Is A Coin Toss For Those 'Dining While Black'

When many black diners go out to eat, it’s not uncommon for them to question if race plays a part in the service they receive.

Turns out, that’s not paranoia.

Zach Brewster is an assistant professor of sociology at Wayne State University in Michigan. He has conducted several national research studies on the experience of dining and restaurant discrimination. In his 2015 survey of approximately 1,000 waiters and waitresses across the country, 53 percent of the participants admitted to not giving black diners their best service.

Brewster says that the reason that servers give for the difference in service comes from the pervasive stereotype that blacks don't tip.

“If you were just to listen to a lot of servers talk, you would get the impression that blacks never tip and whites are always tipping extremely generously and that's just simply not the case. There is a difference, but it's a nominal difference,” Brewster says.

The issue of "dining while black" has been highlighted by two recent Kansas City incidents that went viral. Last month at an Applebee’s in Independence, Missouri,  two black college students were racially profiled, resulting in three employees being fired and the restaurant closing. Also last month, at a Hooters in Overland Park, a young black child who was dining with his family was spat on and called the N-word by a white diner.

Carlton Logan, a food blogger and reviewer, eats out frequently and, as a black person, is not surprised by the study. However, he says he stills finds it dismaying that if a black person goes out to eat four times a week, the odds are that two of those meals will be marred by sub-par service.

“It reaffirms for me it’s happening. You know, we can pretend like it’s not, we can go, that doesn’t happen. But it does and it happens every day. I think these two recent cases here in the city highlight that,” Logan says.

Logan says this is no small issue. It can take a toll on blacks who eat out, particularly those who eat out frequently, and sometimes even tip more than industry standard to combat stereotyping. This “paying it forward” only goes so far in warding off dining discrimination for other black diners.

Pancho Villegas is a server who has worked for many Kansas City restaurants for the past 13 years.  Villegas is sadly not surprised by the studies showing stereotypes toward black diners. He has seen this bias as early as his first serving job when he was 18 years old.

“Nobody was eager to serve on an African American table. They’d say it was because of the fact that odds are we aren’t going to get a tip or it’s not going to be the standard service tip,” Villegas says.  “I would have to say, if they’ve got that at the back of their head, that they’re not giving the best service possible.”

Brewster says that while he will continue to research restaurant discrimination, he knows it difficult to inspire people to change practices that go beyond merely providing good service. 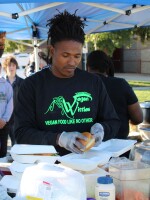