The US Senate voted 59-41 Thursday to reject President Donald Trump’s declaration of a national emergency to build a barrier along the US-Mexico border. Senator Roy Blunt of Missouri was among the 12 Republicans who joined Democrats to go against the president on what some are calling an historic vote.

The Republican-led Senate sent a firm message to the White House, with several Republicans saying they could not support the president because they felt he did not have the authority to take such steps.

The Constitution gives Congress, not the president, the authority to appropriate funds;  however, federal law also says the president can take over some of that responsibility during a national emergency.

In a statement, Blunt said he had opposed the Obama administration’s attempts to “circumvent Congress’ appropriating authority,” and that the same principle should apply, regardless of which party occupies the White House.

In that same statement, Blunt said he believes that securing the border has to be the first step in addressing immigration issues, but also that there are "several existing authorities" that could be used to secure the border without declaring an emergency.

Thursday's vote was on a resolution to disapprove, or effectively cancel, Trump's February proclamation to spend $3.6 billion more than Congress had appropriated.

Some senators expressed concern that the funding for the barrier would come from the Pentagon’s budget.

Missouri’s other senator, Josh Hawley, sided with the president, supporting the emergency declaration to build a barrier and voting against Thursday's resolution.

It’s the first time Congress has voted to block a presidential emergency since the National Emergency Act became law in 1976.

President Trump has indicated he plans to veto the resolution of disapproval. 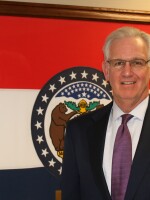