Floodwaters on the Illinois and Mississippi Rivers may be going down, but rain has continued to soak farmland around much of the state. More rain could be on the way later this month.Wet fields make it hard to plant because farmers use large, heavy machinery in the fields. Even if a field is dry enough for equipment not to get stuck, too much pressure on wet soil makes it hard for seedlings to develop solid root systems.

“Without good root development, there isn’t anything to feed the plant, and if we’re not feeding the plant, we don’t get much back in yields,” said Steve Fourez, a farmer in Vermillion County, Illinois.

Fourez, a board member for the Illinois Farm Bureau, said he has about 500 acres where he farms corn and soybeans. This time last year, he had it all planted. This year, it’s been too wet to even start.

“It’s been marginal at best, and you only get one chance to get the crop out. And I’d really rather not mess it up before it ever gets the chance to start,” he said.

Fourez said it’ll take him about 10 days if the “mechanical goblins” and weather cooperate.

A year for the record books

This year has had the “third wettest May to April period in 124 years of records for the state,” said Brian Kerschner, the spokesman for the Illinois State Climatologist office.

The soil is so wet, Kerschner explained, that the moisture levels are in the 90th to 99th percentile statewide.

“When we’re approaching the 99th or 100th percentile, it’s basically some of the wettest soil that we’ve seen in the state,” he said.

The wet soil and delayed planting could mean farmers don’t get as high of yields. That’s a big deal when farmers already face  trade uncertainty amid the trade war with China, and crop prices that are lower than they’ve been in a decade.

The cost of planting late

Most farmers try to get corn into the ground by mid to late May, which gives the crop time to produce the most it can. Fourez said he’s ok planting soybeans a bit later into June, but that still doesn’t give producers much time to get seeds in the ground.

Fourez said this delayed planting season will have economic impacts in rural areas, which haven’t fully recovered from the 2008 recession.“When we start tightening our belts, the rural economy in Illinois has to take a deep breath, because that’s where most of the revenue that floats around in rural Illinois comes from,” he said.

Some farmers are getting antsy, so they’re going out in the fields to plant even though the ground is still wet. Jared Kunkle planted a bit earlier than most, getting a lot of his crops in before Easter in late April.

Kunkle farms about 2,000 acres in Warren County, Illinois, and he has all but about 40 acres of corn planted and half his soybeans in the ground. He expects he’ll have to replant seeds in some areas, but he says he feels a lot better than having nothing planted at all.

According to the U.S. Department of Agriculture’s crop progress reports, about 11% of Illinois  corn has been planted and about 4% of soybeans. Last year at this time, 88% of corn and 56% of soybeans were in the ground.

Cool temperatures aheadKerschner said the weather this week should be a bit dryer, which is a blessing to farmers hoping to get seeds in the ground. However, he said temperatures are expected to remain low, which won’t help dry out fields.

And then, “we are looking to re-enter an active weather pattern to end May,” he said. In other words: more rain could be on the way.

When planters do hit the fields, Kunkle said farmers will be working long days. Drivers may have to be patient as farm equipment makes its way down the road.

He hopes farmers stay safe, too, “because it’s going to be wild when people get back in...I can’t imagine if I didn’t have anything in. It would be extremely stressful.” 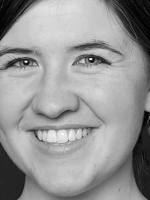 Madelyn Beck
Madelyn Beck is from Montana, but has reported everywhere from Alaska to Washington, D.C. Most recently, she was the Wyoming reporter for public media collaboration Inside Energy. There, she reported on regional and national energy issues for radio stations around the West.
Latest Stories