Missouri Corrections Department To Counties: The Check's In The Mail For Housing Inmates, Eventually

Counties across Missouri hoped this was the year that the Department of Corrections would make headway on the $20-$30 million they’re owed for housing inmates who eventually go to state prisons.

But legislators allocated only $1.75 million more to address the backlog. Missouri's practice of reimbursing counties in this way is unique in the United States, and local sheriffs and county leaders say it’s time for a better solution. 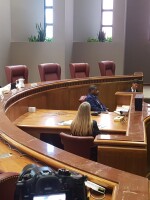