Updated 2:05 p.m. May 24 with comment from Parson spokesman — Missouri Gov. Mike Parson signed strict abortion regulations into law Friday, just hours after one of the biggest GOP donors encouraged him to veto it.

Parson privately signed the bill in Jefferson City, meaning he did not take questions from reporters. His office put out a news release, saying, "we are sending a strong signal to the national that, in Missouri, we stand for life ... all life has value and is worth protecting."

Parson also did not respond to requests for comment regarding David Humphreys' break with the party Thursday night. The businessman from Joplin — who's donated millions of dollars to help the GOP take firm control of the state House and Senate —said  HB 126 was "poorly thought out and passed without appropriate public debate," adding it is "bad public policy and bad for Missourians."

A person who close is to Humphreys but did not want to be identified said that if Parson signed the bill, the megadonor may fund a statewide ballot measure to repeal the restrictions in 2020, but had no further details.

The governor’s office had been making arrangements for a public bill signing, according to communications director Steele Shippy, but severe weather and tornadoes changed those plans.

“Our intent to sign the bill never changed, however, we made the decision and believed it was more important to ensure our office remained focused on assisting communities in the wake of disaster and facing widespread flooding,” he said.

Humphreys said in his statement that he didn't want to become part of the abortion debate. And while he is "personally opposed" to abortion, he said, "I do support a women's right to choose, particularly in the case of rape or incest."

The bill that passed last week would ban abortions as early as eight weeks into a pregnancy, which can be before a woman knows she's pregnant. And while there is an exception for medical emergencies, the ban would be enforced in the case of rape or incest. That provision is what Humphreys took issue with.

"(I) have to believe that the politicians in Jeff City that voted for this bill would themselves support their wives or daughters' right to choose if their loved ones were raped," Humphreys wrote.

House Minority Leader Crystal Quade, D-Springfield, said in a statement Friday that Missouri will be treating people "as little more than fetal incubators with no rights or role in the decision."

The majority of the abortion restrictions will take effect Aug. 28 unless challenged in court. The ACLU of Missouri called the state's new law unconstitutional and said it will look at options, including legal action.

Parson's signing coincided with the  first lawsuit filed against Alabama's abortion law, which is the most restrictive in the country. 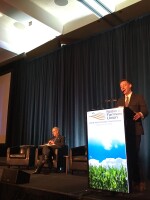