The Chiefs beat the San Francisco 49ers, 31-20, in a close game that saw Kansas City come back in the fourth quarter and hold on during the final minutes. Damien Williams had two touchdowns, and Travis Kelce and star quarterback Patrick Mahomes had one apiece. Mahomes was named MVP.

“Through thick and thin, the Chiefs have always been a cornerstone of the city," said 24-year-old Taylor Harwerth, a North Kansas City resident, "even when we had really, really bad years."

The game capped years of waiting — 50, to be exact. Self-proclaimed “diehard Chiefs fan” Jazz Walker of Kansas City, Missouri, came with his brothers (and hundreds of others) to KC Live! in the Power & Light District downtown. He saw what he wanted to see: “something special.”

It was a special night, too, for Andy Reid, a former Mizzou football assistant coach, who gets his first Super Bowl ring as a head coach.

"Love this guy right here," Reid said right after the game, nodding to Mahomes, the 24-year-old phenom standing alongside.

The Super Bowl was played at Hard Rock Stadium in Miami. Tickets went for more than $6,000 on the secondary market. But for many fans, there was no place like home — or the Power & Light District, The Ship in the West Bottoms or a good old-fashioned gathering with friends.

And then there was Faye Jacobs at Southeast Community Center in Swope Park at her first Super Bowl party in a long time. She spent nearly 27 years in prison and was released in 2018 with the help of the Midwest Innocence Project.

“Oh my God, it is just unbelievable. It’s wonderful. It’s a dream come true,” she said. “It’s something that I thought would never happen for me, being that I was sentenced to life without parole at the age of 16. To be able to be here today, is everything.”

They’re getting their wish: It'll start at 11:30 a.m. Wednesday. While the route hasn't been specified, it'll end with a big rally at 1:30 p.m. in front of Union Station.

“Um, it’s overwhelming,” he said, adding later: "What happens is that when your team loses, you stick with them, follow them and help them build."

Zaqq Williams, 25, just moved back home from Atlanta. As he watched the game at Prairiefire in Overland Park, Kansas, he said he hadn’t lost faith all season.

“It’s destiny,” he said. “It’s their time. KC needs to be on the map. We’re the middle of the United States of America. It’s time for us to be recognized.”

“What we mean by Mahomes magic is the play never dies,” he said at Prairiefire. “As long as he’s on the field with the ball anything can happen.”

Jack Dykstra, a 24-year-old from Leawood, wore a jersey signed by Jamaal Charles when he was a senior in high school. He “wasn’t smart enough” to take Monday off, but was happy he was out late.

“They poured their hearts out since the beginning of the season, when defense was not playing that well,” Dykstra said. “You know what? I’m glad to be here.”

John Reichmeier from Overland Park came to KC Live! to watch the game and said the day was “honestly surreal.”

“I haven’t slept in the last week or so,” he said before the game. “We’re so excited.”

The Chiefs, 12-4 in the regular season, made it to the Super Bowl after a couple of impressive playoff victories at Arrowhead Stadium: First, a historic 51-31 comeback over the Houston Texans on Jan. 12, and a closer, but 35-24 victory against the Tennessee Titans on Jan. 19.

San Francisco’s path to the Super Bowl started by beating the Minnesota Vikings 27-10, and soundly beating the Green Bay Packers 37-20 on Jan. 19 for the NFC title.

The 49ers, who went 13-3 in the regular season, have a local connection: Assistant offensive coach  Katie Sowers grew up in Hesston, Kansas, and worked in Kansas City, Missouri, before finding her way into the NFL. Sowers — the first woman coach and first LGBTQ coach in any Super Bowl — has the city skyline tattooed on her arm.

Laura Ziegler is a community engagement reporter at KCUR 89.3. Follow her on Twitter @laurazig or email her at lauraz@kcur.org.

Frank Morris
Frank Morris has supervised the reporters in KCUR's newsroom since 1999. In addition to his managerial duties, Morris files regularly with National Public Radio. He’s covered everything from tornadoes to tax law for the network, in stories spanning eight states. His work has won dozens of awards, including four national Public Radio News Directors awards (PRNDIs) and several regional Edward R. Murrow awards. In 2012 he was honored to be named "Journalist of the Year" by the Heart of America Press Club.
See stories by Frank Morris

Julie Denesha
Julie Denesha is a freelance documentary photographer based in the Kansas City area.

Laura Ziegler
Laura Ziegler began her career at KCUR as a reporter more than 20 years ago. She became the news director in the mid 1980's and in 1988, went to National Public Radio in Washington, D.C. as a producer for Weekend Edition Saturday with Scott Simon. 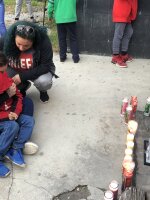