Allison Rojas likes to scroll through Instagram after a long day at school.

For months, the high school sophomore at Collegiate School of Medicine and Bioscience in St. Louis has noticed her feed filled with pictures of students sleeping, eating and parking badly. Some photos show students in the restroom.

“A lot of these students won't be able to see this or don't even know that it's on there until someone tells them,'' Rojas said. “Then if it's by word of mouth, then it's kind of like this word gets around, ‘Oh, you were sleeping in this class and everyone saw it.’”

Rojas isn’t the only one noticing the trend. Anonymous social media pages dedicated to posting pictures of students in embarrassing situations have quickly spread in popularity at high schools across the country.

Students are encouraged to submit photos of their classmates sleeping or doing other activities that may be embarrassing. The account owner then posts them anonymously.

Some students consider the posts lighthearted jokes. But others say they’re an invasion of privacy. Rojas has been an advocate for students who are self-conscious or embarrassed to see themselves portrayed on the pages.

For Rojas, the thought of having someone take a picture and post it without consent raises red flags. She said it can be especially problematic for students who don’t have social media.

Some of the account owners promise to remove a photo if someone asks them to do so. But the posts spread so quickly that there’s no guarantee a student will be shielded from harm.

Some students consider the posts a form of bullying. But schools can’t do much about it because many Missouri school districts base their anti-bullying policies on a state law that uses a 2007 definition of cyberbullying. The definition makes no mention of social media. Instagram launched in 2010.

“It's absolutely outdated, and it will continue to be outdated,'' said Tina Meier, the CEO of the Megan Meier Foundation, which works to prevent cyberbullying. “I don't know that with technology that we will ever get to a place that we will be ahead of it.”

Meier started the foundation in 2007 after her daughter, who had been bullied online, died by suicide. After years of working on the issue, she has concluded that Missouri is behind many other states in bullying prevention.

While outdated policies keep Missouri schools from reacting to new cyberbullying trends, they’re not the only problem, Meier said. “If it happens outside of school on a weekend, it's not school-owned technology, then they don't really have a legal right to be able to get involved.”

Even if a school can step in, identifying the owner of an anonymous Instagram account is an arduous process that involves police departments and social media platforms.

Meier said police don’t consider cyberbullying a threat unless a specific student is repeatedly targeted. Because the anonymous accounts usually don’t meet this criteria, it is unlikely that law enforcement will step in.

Ultimately, with only so many hours in a school day, she concedes that schools have little ability to react to cyberbullying.

Schools across Missouri have grappled with how to combat cyberbullying in their classrooms. Steelville High School, about 30 miles east of Rolla, recently moved to ban cellphones.

But Megan Marietta, St. Louis Public School’s manager of social work services, said that isn’t always the best solution. Instead of restricting how students use social media, the district should prioritize teaching responsible use, she said.

“Not all social media is bad,” she said. “I think that's really important to remember, too, that for many of our students, it did give them a connection to others, especially during the pandemic.”

Students agree. Rojas, who spent much of her freshman year in virtual school, met most of her classmates online and can’t imagine what life would be like otherwise. “I would have gone back in person to all these people that I still don't know,” she said.

Meier, who runs the anti-bullying foundation, suggests schools talk to students about how to use social media responsibly.

“If you don't have a bigger approach within a school system, it is then going to fall to the wayside,” Meier explained.

The same Missouri law that schools use to define cyberbullying also mandates that districts educate students on its harmful effects. But Rojas said she has not seen St. Louis Public Schools go beyond an occasional assembly about the student handbook.

“For SLPS to really get their point across about educating us about cyberbullying, they would have to be more direct and intentional,” said Rojas, adding that education is crucial now as anonymous social media pages gain popularity.

“There are smaller things that you might not know is cyberbullying,” she said. “Our schools aren't doing a great job at educating us on what cyberbullying is and how to stop it.”

In a written statement, St. Louis Public Schools’ School Culture and Climate Coordinator Casetta Brown said the district has no intention of updating its bullying policy but plans to roll out a bullying prevention education plan this fall.

“Our goal is [to] teach scholars what bullying is, what it is not and how to support those that are experiencing it in a proactive effort to stop it from happening,” she said.

One state legislator is trying to address cyberbullying. The Show-Me Digital Health Act, a bill introduced by state Rep. Jim Murphy, R-St. Louis County, would require public schools to teach students how to responsibly use social media. If approved, it would go into effect in 2024.

Rojas said she recognizes not all social media is bad but emphasizes the importance of using it responsibly. “It’s all about finding that balance of: ‘How do we use social media for its best purposes and not go into the negative side?’”

One way Rojas has seen her classmates do so is by starting accounts dedicated entirely to complimenting other students.

“I think positivity pages like that, when they're directly trying to make that effort to be nice to people, those are definitely a better way to use social media,” she said.

Lilley Halloran is a high school intern at St. Louis Public Radio. She will begin attending the University of Missouri this fall to study journalism. 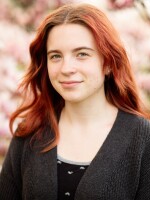 Lilley Halloran
Lilley Halloran is a St. Louis Public Radio intern during the Spring 2022 semester and a high school senior at Collegiate School of Medicine and Bioscience. She will begin attending the University of Missouri in Fall 2022.
See stories by Lilley Halloran
Latest Stories