Helping Or Hurting? For Some Native Americans, Tribal-Casino Gambling Collides With Gambling Addiction

Tribal casinos receive a lot of attention. What doesn’t receive as much attention is the higher incidence of problem gambling among Native Americans compared to the rest of the population.

Washington University’s David Patterson Silver Wolf has studied how the Native American population has a higher rate of gambling addiction than the average rate of the general population. Estimates put the problem-gambling rate among Native Americans at 2.3 percent, more than double the rate among all adults.

And where there is gambling abuse, there are other problems.

“Substance-abuse disorder sort of co-occurs with gaming disorders. I was involved in a study looking at American Indian gaming and how those two things play together and how one might protect the other or might influence the other,” said Silver Wolf, a Cherokee descendant.

Silver Wolf said that Native Americans who aim to live a traditional life — such as going to ceremonies and refraining from alcohol and drugs — have the least amount of problems with gambling.

“More-traditional Natives are more-healthy Natives. And you can talk about going back to learning your language, learning your culture. Doing all of those things are protective for health matters,” said Silver Wolf.

That is why there is an effort to connect people to their culture in Native American communities.

The Indian Gaming Regulatory Act of 1988 paved the way for tribal gaming. Today, 28 states have tribal casinos, which are hosted on reservations. Last year they earned more than $32 billion in revenue, according to the American Gaming Association (AGA), a leading trade organization for the gaming industry.

A portion of the gaming revenue gets shared with individuals in tribes where the casinos are located. The money also benefit communities — supporting education, buildings and services. And casinos also provide jobs in the thousands, although exactly how many is not clear. The AGA puts the number at more than 600,000, while the Bureau of Labor Statistics puts it at closer to 100,000.

“What happens is that community wants to support that homegrown casino,” said Silver Wolf. “And why wouldn't they find ways to go in there and support that, even if it costs them an extra tax on them if they spend their own money?”

And with the benefits, there are challenges.

Jack Conrad will tell anyone he’s an alcoholic in recovery. When it comes to the hold that gambling has over him, he’s less open. He will say he knows he has to keep himself away from casinos.

Why is Gambling Addictive? Gambling can stimulate the brain's reward system much like drugs or alcohol can, leading to addiction. Exactly what causes someone to gamble compulsively isn't well-understood. Like many problems, compulsive gambling may result from a combination of biological, genetic and environmental factors.

“Addictions are addictions, and you got to face your problems, so you got to stay aware of the trigger points,” Conrad says.

Conrad is from Oklahoma, where there are about 130 tribal casinos. There are at least six casinos to tempt Conrad in the Kansas City, Missouri, area where he lives now.

However, it was in Oklahoma where Conrad realized how devastating gaming could be. A man attending a meeting for people addicted to alcohol and drugs shared how gambling destroyed his life.

“He talked about (how) he's lost everything: his wife, his kids, his home. He gave it all away to the casinos. And that caught my attention. I'll never forget it,” Conrad said.

Silver Wolf said that gaming addiction is not about a personal or a moral failing.

“Addiction, substance-abuse disorder, is a brain disorder,” he said.

According to the AGA, there are about 500 tribal casinos around the country. And their proliferation since 1988 presents a complex issue for Native Americans, many of whom are prime candidates for gaming abuse or addictions. Meanwhile, the positive impact that casino revenue has on lives is seen everywhere, in better health care, schools, roads and other community needs.

[Problem Gambling is] gambling behavior patterns that compromise, disrupt or damage personal, family or vocational pursuits. Characterized by an increasing preoccupation with gambling, a need to bet more money more frequently, restlessness or irritability when attempting to stop, and “chasing” losses.

Often, there’s no contest between the two.

“The goodwill of helping their own people sort of wanes, and the addiction takes over,” Silver Wolf said.

Timothy Fong, an addiction psychiatry professor and co-director of the University of California, Los Angeles Gambling Studies Program, is another expert who has studied how race and ethnicity intersect with gambling problems.

“You have to have ethnic-specific programming and treatment, but we also have to understand what are the specific cultures that drive elevated risk,” Fong said. “We certainly know, for years, about increased alcoholism and substance-abuse problems among Native Americans. And the questions are: Are those same risk factors what drive gambling problems? Or, is there something unique about gambling to the tribes that are causing some problems there?”

Patrick Pruitt, social worker with the Indian Center in Kansas City, Missouri, said that above and beyond race, gambling abuse and addiction is a socio-economic issue.

“If they're desperate to try to get their rent paid or get groceries or get their car payment so they can get the work, then they go to the casino and they'll take their last $50 to try to turn that into $500, and they ended up losing that, and at that point they're in worse condition than they were before they went,” Pruitt said.

Studies show that about one in four Native Americans live below the poverty line. But, Pruitt said, gambling isn’t as widely acknowledged as a problem in the Native American community as other addictions are.

Pruitt, who is a Chickasaw Nation descendant, said that the Indian Center provides a culturally comfortable space for people to be a bit more honest about how gambling impacts their lives.

“They see surroundings that are more familiar to them. They see things like an abalone shell, sweet grass, sage, feathers. So they're a little bit more comfortable,” he said.

Pruitt said that although Native Americans with gaming problems don’t only go to tribal casinos, he does think they are a double-edged sword.

“Yes, they bring in revenue, but at the same time, I ask myself the question, ‘Are they hurting more than they’re helping?’ I don’t know the answer to that,” Pruitt said. 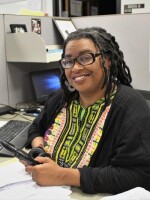 Michelle Tyrene Johnson
Michelle is a reporter covering race and culture for KCUR. As a fourth-generation Kansas City, Kansas native and resident, Michelle has been a newspaper reporter, an employment attorney, a diversity and inclusion speaker, a columnist and a local and national playwright. She is the author of three books about diversity and one book about her grandmother.
See stories by Michelle Tyrene Johnson

Lists of Help by State

Provides resources and referrals for all 50 states, Canada and the US Virgin Islands.

Help is available 24/7 and is 100 percent confidential

24/7, 365-day-a-year treatment referral and information service (in English and Spanish) for individuals and families facing mental and/or substance use disorders.

Fixed Odds is a reporting project from Sharing America, a public radio collaborative including Connecticut Public Radio, St. Louis Public Radio, KCUR and OPB. The series explores the impact of problem gambling on communities of color and the extent to which states provide money for problem gambling treatment.

Sharing America is a Collaboration of: