The city of St. Louis is being recognized by the National Wildlife Federation as a leader in the effort to restore the monarch butterfly habitat.

At a ceremony Saturday certifying the monarch habitat at St. Louis’ city hall, the wildlife conservation advocacy group challenged mayors across the country to launch milkweed planting initiatives similar to the one launched last year by Mayor Francis Slay. Milkweed is the monarch caterpillar’s only food source.

“Fifteen years ago almost a billion monarchs would make the journey in the course of a season from Mexico all the way through this part of the country to Canada and then back. Almost a billion. We’re around 50 million right now. That’s almost a 95 percent decrease. And there’s a lot of contributing factors to this. But the biggest one is a lack of habitat,” said Collin O’Mara, president and CEO of the National Wildlife Federation, during the ceremony.

According to Lincoln Brower, an ecologist who studies monarch migration, illegal logging in Mexico and the use of pesticides in the United States have both contributed to a reduction in the distinctive orange and black butterfly’s habitat.

“I want to make sure every kid in America has a chance to see robust monarch populations. But the only way we’re going to do it is neighborhood by neighborhood, block by block, city by city, county by county, state by state,” O’Mara added, pointing to the need to restore the monarch habitat all along its migration route.

When Slay launched the Milkweed for Monarch project last year, the goal was to plant 250 monarch habitats in the city. According to Slay, St. Louis now has more than 200 registered habitats—including the one at city hall and two at the mayor’s house.

“The regional demand for milkweed has outpaced the supply,” said Slay. “There’s been a run on milkweed. That really pleases (me) because it means people are paying attention.”

Slay said it’s important to him to restore the butterfly’s dwindling population because it helps pollinate the world’s food. He also said it’s a great way to see nature in action.

“My wife Kim and I have noticed somewhere in the neighborhood of 40 caterpillars in our monarch gardens at our home in south St. Louis. And it’s a real joy,” Slay said, pointing to pictures he took of the butterflies in various stages of metamorphosis outside his house. 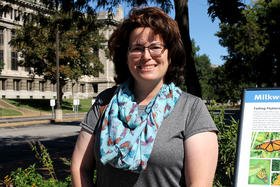 You power public radio.
St. Louis Public Radio is your trusted source for reliable reporting on politics in the St. Louis region, Jefferson City, Rolla, and the Metro East. Through Election Day and beyond, we will be here, delivering the news, providing context and keeping you updated on everything that is happening. It’s all possible because of donations from people like you. Support this work by making a donation today.
DONATE NOW
Related Content