Boone County has one of the highest vaccination rates in Missouri, according to the Department of Health & Senior Services. 49.0 percent of the county has completed their vaccine regiment, and 55.5 percent have at least begun the process.

Yet there are still many areas in the county where COVID-19 vaccination numbers remain low, so Columbia/Boone County Public Health & Human Services has decided to try something new.

Instead of asking residents to come to physical clinics for vaccinations, they partnered with Boone County Clerk Brianna Lennon to create the “Mobile Vaccine Unit.”

The doses are loaded up in a van with a nurse and a driver and taken to people in less central parts of Boone County where vaccination numbers are still low due either to hesitancy or access barrier – like disability or transportation barriers.

The Mobile Unit’s first stop of the day was in Recreation Park in Centralia, about 30 minutes outside of Columbia, and as you pulled into the parking lot you could see Lennon, along with a public health nurse and a nursing student, starting to set up their temporary vaccination station: a folding table, a couple of chairs, a sign, and a small Rubbermaid cooler full of vials of vaccine.

Folks were already waiting when the team arrived, and many mentioned how they were being “strong-armed” to get the vaccine by spouses or other concerned loved ones. Within about an hour the team had vaccinated more than 10 people, which Barker said surprised her.

“I was very happy with the numbers that we had; it might not sound like a lot to some people. I think we did run 11 or 12, but that's awesome,” Barker said. “That's 11 or 12 more people that not only got the vaccine, but then will go and tell their family, their friends, coworkers, whoever it may be that, ‘Hey, I got this, I'm okay.’ I think that might motivate them to be like, ‘Okay, then I should go and do it now.’”

Barker said she thinks the uptick in vaccinations at the mobile clinic and other community-based outreach clinics is primarily due to the rise in cases from the more infectious delta variant. But it’s also because many barriers to access are eliminated.

According to the Centers for Disease Control & Prevention, the delta variant is extremely contagious, and more than twice as contagious as earlier variants. It has been causing much more severe infections in younger people – those in their 20s, 30s, 40s – and has hit the unvaccinated community hardest.

“We can hit so many different places when we're on wheels,” Barker said. “So, I think us coming to them just helps with the convenience, and I do feel like it kind of opens doors where it's like, ‘We care about you.’ So, we're gonna come to your home and talk to you answer all your questions and make this as easy for you as possible.”

As they wrapped up in Centralia, the team packed everything into the county clerk’s van. They had four more hour-long stops scheduled for the day – including in neighborhoods and apartment complexes, sometimes just parking on the side of the street.

Their stops for the day included Centralia Recreation Park, the Gregory Heights Neighborhood, the Clearview Subdivision, El Chappel Neighborhood, and the North Hampton Apartments – where Barb Forck was already waiting.

Forck said she called the Health Department a few days prior, “and I said, ‘You guys aren't going to forget about me. Are you?’” She received her first Pfizer vaccine dose from the mobile clinic the last time they visited.

She was worried about getting her second because she can’t drive to vaccination locations due to her eyesight and she lives with and takes care of an at-risk, paralyzed man.

“And his delta virus coming out, it scares me. It really does,” Forck said.

She said they have an aide come in to help them five days a week, and since she can’t be sure others are vaccinated, she wanted to take advantage of the mobile unit – protecting herself with a vaccine, but also getting questions answered about things like the need for booster shots.

“I just wish more people would get this vaccine,” Forck said. “I've got family members that won't get the vaccine, because they say they don't have to… and it makes me mad, because they are younger people, but they don't realize that all these people that aren't getting vaccinated, they are causing problem for everyone.”

And added that she’s already worried about a COVID variant worse than delta.

“Then what they're going to do is cause it to mutate and the people that are vaccinated are going to get a mutated strain and they want the vaccine isn't going to work as good,” Forck said.

As the day – and the mobile unit – rolled on, County Clerk Brianna Lennon looked back on the past 16 months of the pandemic.

She said last year her office had to spend their time figuring out how to make elections safe, but now that things have slowed down on her side, at least, she’s happy to be able to pay it forward.

“It's been really nice now that we aren't 100 percent focused on that to be able to help the health department because they haven't really been able to take a break, you know?’ Lennon said. “They were doing that in 2020, and they're still doing it into 2021.”

She added that creative solutions and cross-agency collaborations have been one of the best things to come out of the pandemic – like Daniel Boone Regional Library lending her the "Bookmobile" to help with voter registration.

While voters and voter registrations haven’t been the primary focus of this effort, Lennon said she has helped a few people get their addresses updated while receiving their vaccines. Two birds, one stone.

The final stop of the day was a parking lot next to a Casey’s on the east side of town.

Throughout the day, the mobile clinic never had a stop where they vaccinated no one. Nurse Kennedi Baker said that maybe it was only one or two people at each stop, but each one of those is worth it.

“I just feel like I've really gotten to know Colombia a lot better… when you get in the outskirts, it's like, ‘Okay, these are also my neighbors. These are my community members, and their lives matter, the opinions that they have matter.’ So yeah, it's really made like a bigger place seem smaller to me.”

By the end of their nine-hour day, Barker said they had given 28 shots, and they’ll be back at it in a few weeks – for second Pfizer doses and hopefully even more people looking to get vaccinated.
Copyright 2021 KBIA. To see more, visit KBIA. 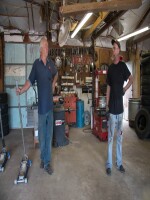 Rebecca Smith
Rebecca Smith is a reporter and producer for the KBIA Health & Wealth desk and Sound Medicine News. She was born and raised in Rolla, Missouri, and graduated with degrees in Journalism and Chemistry from Truman State University in May 2014. Rebecca comes to KBIA from St. Louis Public Radio, where she worked as the news intern and covered religion, neighborhood growth and the continued unrest in Ferguson, Missouri. Aside from her work, she is partial to long runs, good books and nerdy television shows.
Latest Stories