Photos: A mother in St. Louis grapples with the impact of flooding and climate change

LaWanda Felder was sitting in her car with her two young children — 20-month-old son Ahmaud Rahim and 2-month-old Aza’ali — when she received the flash flood warning.

“I just kept saying please just let me be able to make it home and don’t get caught in traffic with two kids,” she said. “The last time there was flash flooding, I was stuck on a highway for almost two hours with a newborn and my 18-month-old, and they were extremely restless.”

When she made it back to her Jennings home, a red brick single-family house off the highway, she expected the worst. Felder’s mother called and told her to check her basement because her cousin’s was completely flooded as a result of several hours of nonstop rain.

Felder is one of hundreds of St. Louis residents who experienced historic flash flooding in July. The St. Louis region received so much rain that in five hours it surpassed the daily rainfall record of 6.85 inches set in 1915. A few hours after that the area received more rainfall in six hours than it normally receives in the months of July and August combined.

“I feel as if climate change has something to do with the flooding because what people don’t understand [is] it’s affecting everywhere. It’s not just here,” she said, giving examples in her life such as: her water bill doubling, having to use smaller appliances to keep her gas bill down, considering stopping using air conditioning as much and struggling to put gas in her car as prices rose — all while raising two young children.

Despite the challenges, Felder said seeing how climate change is impacting her children and community drives her to want to make change for the better. 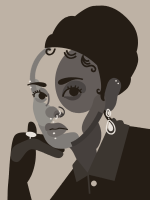