88.5 FM KMST Rolla is currently experiencing technical difficulties.
Health, Science, Environment
NPR Next Generation Radio
NPR's Next Generation Radio Project is a 5-day digital journalism and audio training project. The hybrid (some people in-person, some remote) program is designed to give competitively selected participants the opportunity to learn how to report and produce their own non-narrated audio piece and multimedia story. Those chosen for the project are paired with a professional journalist who serves as their mentor for the week.

When the water recedes but the hardship remains: One man’s struggle to rebuild

EAST ST. LOUIS — “Even when I was growing up 40 years ago, the weather wasn’t this crazy," said East St. Louis resident Alvin Cooper. "Climate change is real out here — these storms, these hurricanes, ain’t coming for nothing.”

On the early morning of July 26, Cooper climbed into bed with his Rottweiler by his side after an overnight shift at the local candy factory. Falling asleep to the sound of rain pounding the roof of his one-story house, Cooper could hear what sounded like a terrifying storm outside.

Yet just an hour later, Cooper awoke to the sound of his dog whimpering and turned to see his cat staring at him in silence at the head of his bed. When Cooper went to place his feet on the ground, he could immediately feel that something was wet.

Making his way to the utility room, Cooper discovered that it was filled with “a river of water.” Glancing around the room, he could see spark plumes exploding from the outlets as water seeped into them.

Cooper frantically tried to drain the water from his house but was stymied by the poorly maintained city sewer system, which would prevent water from quickly draining on his block. Copper grabbed a bucket from inside his house in order to remove the water.

“The buckets each held three gallons, and I filled them up at least 60 or 70 times,” he said.

Over the next few weeks, the stench of standing water in his house smelled like a mix of rotten eggs and raw sewage — a smell Cooper said made his head hurt.

He needed to have his flooring be ripped out and replaced, but he didn’t have the money to hire labor to help him fix it. Because his electrical system had shorted out during the flood, Cooper still lacks hot water a month-and-a-half later. He relies on his stove to boil water for showering and cleaning.

He took time off from work to begin cleaning up his house, but Cooper didn’t have the resources to finish all of the necessary improvements. On a half-acre lot, his rider lawn mower would make it easier for him to mow, but he didn’t have it, so he had to use a push mower, which was physically taxing for the 59-year-old in the Midwest heat.

“Right now I’m still stressing because I don’t have the necessary funds to fix the house, but I’m living — you know what I’m saying,” Cooper said. “I can still live and work in the house — wait, work on it little by little until I get it back together.”

For Cooper, climate change not only impacts his home, but it also threatens his identity. He identifies with the city of East St. Louis because it is an intrinsic part of his soul. He grew up in the area and doesn’t see himself living anywhere else.

Therefore, he grows concerned when he hears about climate change because it could no longer make his home or his community inhabitable. This new reality could wipe out not only his identity, but the identity of generations of African Americans who have rooted themselves to East St. Louis, and who are determined to see the city grow and attract a more diverse array of residents.

“I don’t have pride in my home right now the way [it’s] looking [from] the damage to the storm,” Cooper said. “I was happier before the storm came than I am after the storm came. I’m downer and kind of sluggish and depressed a little more.”

Cooper was also behind on his taxes and home bills, and it made it hard for him to pay for these things because he had to take time off work. Because he was by himself, Cooper didn’t have people who could help clean up his house while he was away.

“I don’t know if the town will ever go back to being in full bloom, with the pretty roses that lined the blocks,” he said.

He is worried that climate change — the extreme weather, the flooding, the humidity — will make it difficult for future generations to live in the area he does. While he mentions he could move to nearby cities, Cooper says he doesn’t because this is the city he grew up in. It is the city he holds closely to himself. 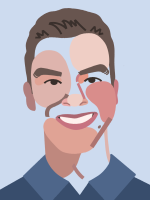