88.5 FM KMST Rolla is currently experiencing technical difficulties.
Health, Science, Environment
NPR Next Generation Radio
NPR's Next Generation Radio Project is a 5-day digital journalism and audio training project. The hybrid (some people in-person, some remote) program is designed to give competitively selected participants the opportunity to learn how to report and produce their own non-narrated audio piece and multimedia story. Those chosen for the project are paired with a professional journalist who serves as their mentor for the week.

Why this birdwatcher and nature educator finds purpose when floodwaters rise

WEST ALTON — On a breezy and sunny day in September, Emily Connor was doing her rounds at the Audubon Center at Riverlands and preparing her packed schedule as the education manager here when she saw a boy by the edge of a wetlands pond who seemed bothered by a wasp that, more than likely, was annoyed itself.

“Did it sting you?” Connor asked him. “Almost! But it happened to [my sister],” the boy responded gleefully.

A small group of young students gathered around, and Connor chatted with them about the exploration they had been doing around this wildlife sanctuary’s 3,700 acres. More than 4,000 students visit the site every year for ecology lessons.

“That’s really where we can make the difference: empowering the next generation in an intentional way. Socially and emotionally. Not just pumping information into our curriculum in schools,” she said.

Her hands-on teaching approach is evident everywhere. Her office is decorated with brightly colored butterflies and magnifying glasses. A large stream table sits in the main building, adorned with small houses and rivers flowing through it. A heart is drawn in the sand.

This type of learning is ideal for a conservation educator like Connor because the Mississippi Flyway where she works is one of the most important migration routes for birds in North and South America.

According to the St. Louis Audubon Society, almost 60% of songbirds and 40% of waterfowl found in North America pass through the St. Louis area twice a year. It’s one of the reasons Connor is an avid birdwatcher as well. And her favorite bird is a regular here.

“It’s this really goofy-looking shorebird that migrates from Mexico and chooses to hang out here in St. Louis,” she said of the American avocet. “Whenever they’re feeding on macroinvertebrates, they kind of shake their head in a figure 8.”

However, climate change is threatening the habitat of many of the birds Connor teaches about. The American avocet, for example, will lose 23% of its migrating range if temperatures stay on track to rise 3°C, or 5.4°F, by 2080.

That is a relatively low percentage compared to more common local birds, like the yellow-throated warbler and the field sparrow. At that same rate of warming, those birds are expected to lose over 90% of their migratory range.

Besides rising temperatures, extreme weather and severe flooding also threaten the sanctuary in more immediate ways. For example, almost all of the 3,700-acre refuge was inundated in the 2019 floods of the Mississippi River.

“I love the ocean, but I know it shouldn’t be here in St. Louis, right here in the middle of the Mississippi flyway. So it was absolutely shocking to me,” Connor said.

The months of flooding severely impacted the healthy ecosystem at the refuge, and it interrupted any hands-on learning at the center.

“All of the programming that we did was virtual, and it was a big pet peeve of mine,” Connor said.

So her team worked to adapt the lesson plans, creating learning kits to be dropped off at schools so students can continue exploring ecosystems in their backyards.

The adapted lesson plans may have paid off in the long term. Just this summer, St. Louis experienced torrential rains that led to even more record-setting flooding. In fact, over the past 10 years, St. Louis saw four of the 10 highest flood levels on record, according to the National Oceanic and Atmospheric Administration.

The threat of frequent flooding, changing bird behavior and ecological loss give Connor the urgency to continue her life’s work, on or off the sanctuary. That’s because Connor believes that climate change can be mitigated “with one person."

"When you think about climate change, it’s such a broad problem to face," she said. "What is the solution? I think the solution really starts on the ground locally with your community.”

Day by day, lesson by lesson, Connor remains optimistic about the future. “I like to look at the world as half full,” she said. “We need to have more people connected to nature and understand that we have a hand in this in order to make any changes.” 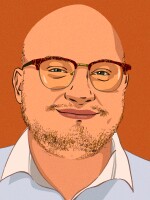 Zachary Stafford
Zachary Stafford is an educator, documentary filmmaker, and lifelong lover of all things radio. He is part of the 2022 NPR Next Generation Radio Project at St. Louis Public Radio.
See stories by Zachary Stafford
Latest Stories