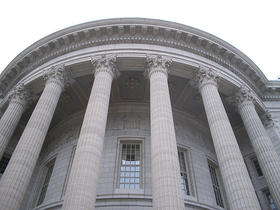 A bill that would change Missouri's open records law has made it through a Missouri Senate committee and is moving forward.

The bill would reverse a decision made by voters in November when they approved a Constitutional amendment known as "Clean Missouri."

Senate Bill 132 is sponsored by Senator Ed Emery of Lamar. It would change the Sunshine Law, Missouri's open records law, to say that any record from either the Missouri House or Senate would be closed to the public if it “contains information regarding proposed legislation or the legislative process.”

Senator Emery is the Chairman of the Senate Committee on Government Reform — that's the committee the bill was assigned to.

Emery said he doesn’t think his bill would hide the legislative process from the public.
“We have a Senate website that has all Senate legislation posted there. It has every amendment that is passed posted there. It has the journals posted there. There is lots and lots of information available relative to the legislative process. Plus, our floor debate is actually broadcast on the internet,” Emery said.
He said lawmakers need some confidentiality because they often go through multiple internal versions of a bill before it's formally filed in the House or Senate.  Making that internal process public, Emery said, "hinders the process"  because some lawmakers don't feel free to have a rigorous debate if they know every word is subject to public review.  This ultimately leads to less vetting of the legislation, Emery said.
In November, Missourians voted to make lawmakers' records open to the public by passing Amendment One, also known as "Clean Missouri."

The “Clean Missouri” amendment said, in part, that “legislative records shall be public records and subject to generally applicable state laws governing public access to public records, including the ‘Sunshine Law.’”

“Amendment One is pretty darn simple, and it says that the House and Senate need to start following the same open records laws that everyone else in the state is already following, from city council all the way up to the governor,” Nicholson said.

Amendment One also created the position of a non-partisan demographer for redrawing legislative district boundaries based on U.S. Census and election results.

Emery’s bill, S.B. 132, has similar provisions to a bill that already passed the Missouri House, H.B. 445; transparency advocates say that House bill would close a host of records from all public bodies. You can see KSMU's coverage of H.B.445 by clicking here.

Just two months ago, Missouri voters approved a constitutional amendment to change how the state draws legislative boundaries. The state's lawmakers, who return to session this week, aren't having it and may seek to nix or rewrite the anti-gerrymandering law.

Missouri was one of four states where voters last year decided to make significant changes to the redistricting process in the name of curbing partisanship and reducing political influence on legislative and congressional maps.