Soybeans Singled Out In U.S.-China Trade War, But Small Farmers Bear The Brunt

In theory, closing off China’s soybean market due to the trade dispute with the U.S. on top of generally low prices for the commodity should affect all industry players, big to small. Agriculture economist Pat Westhoff begged to differ.

“The impact on total revenue may be very similar across the scale of production,” according to Westhoff, who’s an ag economics professor at the University of Missouri. “But sometimes the effect on net revenue can be very different. So a given price that may be difficult for a large producer can be catastrophic for a small producer.”

In other words, if you’re a farmer who plants only soybeans on relatively few acres, you’re probably in trouble.

Large agribusinesses have worldwide sources and markets in lots of countries, and even medium-sized farmers in the U.S. have diversified enough to stay afloat.

That’s the case for Robert Alpers, a farmer in the central Missouri town of Prairie Home. He farms 4,000 acres, about half soybeans, half corn. But his family also has a 550-head cattle operation and a side business of making and fixing farm necessities equipment like feeding troughs and livestock gates.

The trade war and subsequent rough soybean market has had a negative impact on his family, but those other sources of income and the size of his operation has mitigated some of the pain.

“Our family’s fortunate enough, we’ve got over 300,000 bushels of storage,” Alpers said while taking a break from tending to newborn calves. “So we’re able to hold our crop for a better price. We’ve got livestock, and the corn market has moved up a little, so we have moved some corn on the cash market.”

Alpers said between diversification and the tariff bailout payments from the U.S. Department of Agriculture, he’s in a good spot, but most of his friends and neighbors aren’t as lucky.

They’ll have to make some difficult decisions this year, he said, because farmers don’t suddenly go bankrupt. They start cutting, borrowing more and eventually get in over their heads. And the low prices and lack of market access due to the tariffs are the kind of thing that can get that ball rolling.

Even with his storage, cattle business and corn crop, Alpers said if there’s another round tariffs, he’ll be forced to make tough decisions. But it won’t sink him.

“This farm has been in my family for almost a century. And we have plans to keep that going,” he said. 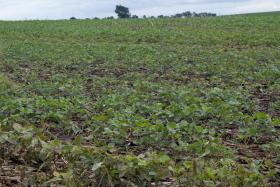 Protected by a global reach

Alpers also knows that large agribusinesses, the ones that buy, sell and process soybeans, will be fine.

“The CEOs of the big companies, they’re not sitting there in their offices twiddling their thumbs,” he said, “they’re trying to move product, somewhere.”

But Cargill CEO David MacLennan told Yahoo Finance in late January that the company has “had to shift supply chains from North America to South America” — buying instead soybeans from Brazil and Argentina.

Those places, Westhoff noted, aren’t in a trade war with China, and are markets that the multinational corporations already work in.

“South American soybeans are going to be capturing a premium in the Chinese market than would they would have had, had it not been for the tariffs,” he said.

Large agribusiness companies are lobbying the Trump administration for an end to the trade war so U.S. soybeans can fully return to the Chinese market. Cargill’s MacLennan specifically said in an January interview with Bloomberg that it’s in his company’s best interests to protect North American farmers.

But as the tariffs continue, how long anyone in the soybean business will be able to last depends on how big they are.

A recent study from the Donald Danforth Plant Science Center suggests that rising temperatures and carbon dioxide levels could have opposing effects on nutrients in soybeans.

About two billion people globally suffer from iron and zinc deficiencies, according to the World Health Organization. Many communities that deal with this problem rely on soybeans and other legume crops to be their source of essential nutrients. As a recent report from the White House noted, climate change will cause temperatures to rise past productive levels for corn and soybeans.

Scientists at the Danforth Center, University of Illinois Urbana-Champaign and the U.S. Department of Agriculture examined the effects of raising carbon dioxide levels and temperatures by three degrees Celsius on soybean plants. They found that while carbon dioxide raised soybean yields and lowered iron and zinc levels, hotter temperatures lowered yields and raised mineral levels.

Recent trade disputes between the Trump administration and China have had a heavy impact on farmers in Missouri, where the soybean industry dwarfs other crops in terms of acreage and production value.

“[China accounts] for something like 60 percent of total U.S. soybean sales in a typical year,” Pat Westhoff, director of the Food and Agricultural Policy Research Institute at the University of Missouri-Columbia, said on Monday’s St. Louis on the Air. “So losing a chunk of that market’s a very big deal.”

Blake Hurst, president of the Missouri Farm Bureau, told host Don Marsh that he and fellow farmers have been directly experiencing the fiscal consequences this year, including a 20 percent drop in soybean prices.