In life, everything is Zen. Daigaku Rumme hopes more St. Louisans embrace it

Zen master Daigaku Rumme admits an early affinity to the San Francisco hippie counterculture of the late 1960s. But that lifestyle didn’t immerse him as fully as it did many anti-war, civil rights demonstrators of that era who, like Rumme, became intrigued with ideals of sustainable land use, individual freedoms and collective consciousness. Rumme dabbled in meditation and Zen practice as a college student. It never stuck, though.

“The concern I had,” Rumme recalled, “was: ‘Could we really re-invent society?’ I doubted that.”

Inspired nonetheless by key teachings and resonant literature, the soon-to-be ordained Soto priest moved to Japan to study Zen with a master teacher there. He said he was lucky to find a teacher willing to mentor him as a disciple.

Today, Rumme is a Zen master himself. After 27 years of living, studying and working in a Japanese monastery, he returned to the West Coast, leading the Zenshuji Soto Temple in Los Angeles before retiring as head priest and moving to St. Louis in 2015. He now teaches at the Confluence Zen Center in St. Louis County.

On Friday’s St. Louis on the Air, Rumme discussed his path to the Zen lifestyle and the surge in popularity around mindfulness.

But can one attain mindfulness from a smartphone app that promises meditation? Millions of people have downloaded apps like Headspace and Calm, and while Rumme doesn’t discount that these programs can help, he has misgivings. One app he examined cited musicians Jimi Hendrix and Bob Marley as examples of mindfulness.

“It just struck me how there’s very little Buddhist element or content in this series,” Rumme observed.

Still, Rumme guarantees that change will come for those who actually practice and persevere with Zen. For those not under the guidance of a Zen master, he suggests embracing one crucial Zen principle:

“It's not a matter of doing something, it's just being that activity,” he said. “There's no need to bring in something extraneous, because our life is Zen. So if you're walking your dog, just walk the dog. If you're mowing the grass, just do that. That. To do that 100% is Zen.”

He continued: “It's not to say that we can't reflect on the past. That's good. We can do that, we can learn from our mistakes, we can plan for the future. But a lot of times it doesn't go the way we hope it will or hope it won't go. So to remain flexible and fluid about plans and keep our attention mostly on what we're doing now is something I would recommend to all people.”

If you’re interested in learning more about the practice of Zen, the Confluence Zen Center is holding an open house Saturday at its new location in St. Louis.

“St. Louis on the Air” brings you the stories of St. Louis and the people who live, work and create in our region. The show is produced by Miya Norfleet, Emily Woodbury, Danny Wicentowski and Alex Heuer. Avery Rogers is our production assistant. The audio engineer is Aaron Doerr. 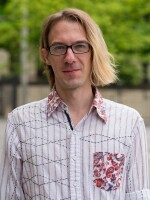