“We Live Here” is a podcast that shares stories about race and class from St. Louis and beyond. Episodes range from investigative accountability pieces to story-based reflections with a focus on everyday people interested in racial equity.

St. Louis Public Radio serves a broad and diverse region. After we experienced a significant spike in engagement throughout our coverage of the Ferguson uprising, STLPR determined we needed to do more to shine a light on stories that impact African Americans in our own region. From this, STLPR developed "We Live Here," a podcasting project with the explicit goal of examining race in St. Louis with an emphasis on stories from residents, organizers, and researchers.

Jia Lian Yang holds a Master of Social Work from Washington University in St. Louis and a Master of Divinity from Eden Theological Seminary. She is the co-founder of the St. Louis-based Who Raised You? podcast, which explores culture and family with a focus on stories from people of color. The show won the Arts & Education Council of St. Louis’ 2018 stARTup competition and was named the best local podcast of 2019 in St. Louis Magazine. Jia brings her experience with LGBTQ advocacy, mental health, workers’ rights, mutual aid, anti-racism and the arts to her coverage.

Lauren Brown holds a Bachelor of Journalism degree from the University of Missouri where she also studied Social Justice. Lauren joined St. Louis Public Radio in June 2019 as an associate producer for the We Live Here podcast. In March 2020 she became the co-host and producer for We Live Here. In August 2020 she worked as a freelancer with American Public Media on an hour long documentary about the racial climate on college campuses titled Black at Mizzou: Confronting race on campus. She is a native of the Chicagoland area and is a huge fan of music from Neo-Soul to Hip-Hop, hence her vinyl collection. 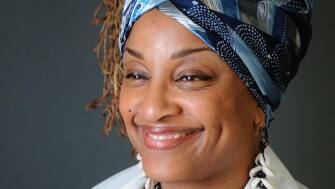 Jade Harrell is the Director of On-Demand and Community Partnerships. She started at St. Louis Public Radio in 2018 as an announcer. Her passion for community and storytelling matured at iHeart Radio, where she was host and producer of legacy community affairs program, Sunday Morning Live for over 13 years.

In the past five years, Brent has shot photos of the Pevely Dairy fire and flooding in Cairo, Ill.; compiled data on St. Louis' hottest days and whitest Christmases; edited a 30-minute video on music in Iraq, and designed a 150+ page ebook.

David Kovaluk is a visual artist living in St. Louis. He has a Bachelor's degree in photography from Webster University, and he currently works for St. Louis Public Radio as their creative everyman.