The U.S. trade war with China has created a financial burden for farmers and companies that import Chinese goods. Consumers, on the other hand, have mostly been spared from the conflict.

That could all change if this month’s negotiations between the U.S. and China don’t go well.

An analysis by the New York Federal Reserve estimated consumer prices overall are about 0.3 percent higher than they would be without the tariffs. President Donald Trump wants to narrow the trade deficit and protect American technology, but if there’s no deal by March 1, a 10 percent tariff on thousands of Chinese imports will more than double to 25 percent.

At that point, suppliers and retailers who admit they’ve been absorbing the cost of the tariffs will likely be forced to push the cost toward customers.

“At 10 percent you can come to a very minimal change, at 25 percent it becomes a different deal,” said Irv Blumkin, CEO of home furnishings chain Nebraska Furniture Mart.

The largest round of U.S. tariffs against China came in September — a 10 percent import tax was imposed on thousands of products. Many of them are chemicals and raw materials, but the list also includes household items ranging from tools and auto parts to shampoo and cosmetics.

“I can’t stress to you how much companies care about maintaining (price) stability,” said Uche Jarrett, a professor of international economics at the University of Nebraska-Lincoln. “It drives their profit margins. It drives their estimates for the future. Whenever there is a change, there’s a lot of uncertainty that follows.”

“The idea is the higher the tariffs, the more you make consumers flip over,” Jarrett said. “But if those prices aren’t changing then you’re not going to get the desired effect that you want.”

Retailers like Nebraska Furniture Mart are bracing for March. Blumkin said a 25 percent tariff is more than suppliers can absorb, so it’ll raise prices for many of his company’s products like carpet and leather furniture.

Manufacturers could move production out of China to countries like Vietnam, Malaysia or Mexico, but Blumkin said there’s a limit to that strategy.

“I mean, China is a powerhouse when it comes to producing things for our industry,” Blumkin said, adding that he is concerned higher tariffs could sour consumer confidence. After the government shutdown and recent stock market volatility, he said shoppers are more likely to hold onto their money.

“You know, they hear the news every day and they see some of the uncertainties that are going on and I think that impacts how people think,” Blumkin said.

Importers are not the only businesses trying to work around the tariffs. Manufacturers whose products are made in the U.S. are trying to manage extra costs that can be traced back to the trade dispute.

“Since we compete against a fair number of companies that do buy offshore, you would think we would benefit from (the tariffs),” said Cusick, whose company is based in Lincoln, Nebraska. “We’re supposed to be the winners.”

Instead, after the U.S. announced tariffs on imported steel in March 2018, the price for American steel went up as much as 50 percent, Cusick said. The company had to raise prices for 2019 to cover the cost.

“We passed as much as we thought we were comfortable with without losing market share. But the end users — the schools, the consumers on the residential basketball side of our business — they’re the ones that are getting hit. So it’s kind of counterproductive,” he said.

And depending how the talks go with China, more businesses like Bison may have to bring customers off the sidelines of the trade war and into the game. 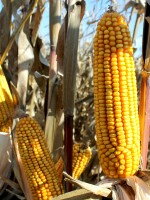 Grant Gerlock
Grant Gerlock is Harvest Public Media's reporter at NET News, where he started as Morning Edition host in 2008. He joined Harvest Public Media in July 2012. Grant has visited coal plants, dairy farms, horse tracks and hospitals to cover a variety of stories. Before going to Nebraska, Grant studied mass communication as a grad student at Miami University in Oxford, Ohio, and completed his undergrad at Buena Vista University in Storm Lake, Iowa. He grew up on a farm in southwestern Iowa where he listened to public radio in the tractor, but has taken up city life in Lincoln, Neb.
Latest Stories