In the wake of mass shootings comes the debate around gun laws. This week, I explore a different angle: the personal responsibility of carrying a firearm.

I’m a sixth-generation descendant on my family farm. Hunting, guns — they were just a part of my life growing up in the country. I always knew where my dad’s guns were, and he taught me how to handle them safely at a young age. But now, as a single mother of twins who lives roughly 30 minutes from any type of condensed population, guns could be a means of protection for my family. I signed up for the concealed carry course for that reason: protection.

Listen
Listening...
/
Listen to the story.

Class was held at Capitol Firearms Academy, just off MacArthur Boulevard in Springfield. The room was dimly lit, a PowerPoint was beaming onto the front wall, and the others were covered in a wide array of firearm signage. There was a pot of coffee brewing and a few cases of store-bought cookies on the back table. Despite the aesthetics, I was giddy. I was eager for the end of the course when I’d be able to legally carry a weapon in public for protection, not only for myself and my family, but also for innocent bystanders if I ever needed to be “the hero.” But, I was surprised with how I felt at the end.

I met other students in the class who signed up for various reasons. Amy (who wished not to disclose her last name) is from Springfield. Amy works overnights at a gas station and she too wanted her license for protection:

“I have the opportunity to protect myself a lot better than pressing a button and waiting for someone to get there,” she said.

And Nick Schroeder. He’s a regular gun user and a father of two. He plans to carry daily.

“Not for any particular reason, I would just rather have it and not need it,” he said.

As the course began, I was a little shocked at how much it seemed like an actual classroom with the teacher up front lecturing and students taking notes. 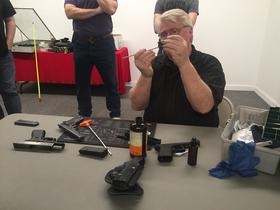 It was all interesting stuff, but I just assumed we’d be spending a little more time with guns. We did a few drills taking guns in and out of holsters, properly loading them, we even learned how to clean our firearms. But the first eight-hour day was spent completely inside a classroom.  I came to realize that was intentional. There’s more to carrying a gun, than just the physical act of carrying a gun. It’s a moral, ethical and religious responsibility.

Our instructor, Jim Feagans, is a lifelong National Rifle Association (NRA) member and has a background in law enforcement.

“A lot of us, when we take the class, when you first start carrying a firearm it gives you a sense of euphoria like I can defend myself,” said Feagans. “But we really don’t look and think about the repercussions of our actions down the road. We talk about what’s going to happen if you ever have to defend yourself and you do shoot somebody … that you’re not going to be the hero that everybody might pretend you’re going to be; you’re going to be the topic around the water coolers. It’s going to weigh heavy on your mind, if you’re any kind of person at all.”

By the time the second day rolled around I was feeling ambiguous, at best. As I sat in the same chair at the front of the classroom sifting through legislation, learning about where I could carry, where I couldn’t, de-escalation techniques, making sure I was never the aggressor, I found myself wondering: Do I want to do this? Do I really want to be the person who pulls the trigger and takes a life? What will the legal ramifications be? And, would I be able to live with myself after the fact?

Before I knew it, it was time for the actual shooting part of the course. With a brown 9mm I had never shot before, I needed to hit my target 21 out of 30 times at five yards, 10 and 15.

I passed — and so did every other student. There were 14 of us. Some had never shot a gun previously.

Cody Stanley, another student who is a staunch gun rights supporter, was a little concerned with how easy it is to obtain a Firearm Owner Identification card. Right now, anyone in the state can submit an application online, pay a small fee, pass a background check and get their card within 30 days. With that FOID card, you’re eligible to possess and purchase as many legal firearms you’d like, regardless of your experience.

“I think there needs to be more about the FOID aspect because when you get a FOID card you don’t have to know anything about guns really at all,” said Stanley. “You just do something online and you get a card in the mail. You go to a gun store, they say ‘do you know what you’re doing? Sure.’ And that’s it. As far as concealed carry, it’s up to the individual. You can’t necessarily have a course that’s 80 hours long, realistically, but at the same time, this doesn’t cover everything. It does enough, I personally think, but I think there should be more done about the FOID card before.”

A sentiment echoed by Colleen Daley, the executive director of Illinois Council Against Handgun Violence. She mentions that there is common ground in this heated debate.

“They tend to say that it’s like, you know, gun owners on one side and gun violence prevention people on the other side, which is absolutely not true,” said Daley. “Because the vast majority of gun owners are really supportive of training; they understand the awesome responsibility that comes with owning a firearm, and they want to make sure that they’re being safe.” 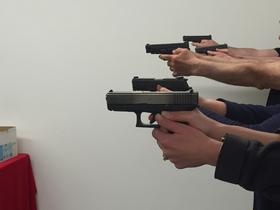 And Feagans, the course instructor, points out that 16 hours doesn’t feel like a lot of time. There’s so much more he could cover — like safety techniques for women — that don’t even involve guns.

“One of the things we talk about, we’d love to go into more detail … is what should you do, what shouldn’t you do,” he said. “You run out of gas, um, you should sit in the passenger seat of the car instead of the driver seat so if somebody drives by, they see a vulnerable lady sitting there they realize she’s not alone. Somebody else was there because she’s in the passenger seat.”

As I listened to him explain, I realized these were all valuable ideas, and ways I could protect myself without a gun.

Firearms can be beneficial. But where there are more guns, there are more accidental deaths, as well. According to a Harvard Injury Control Report, four states with the most guns had a mortality rate that was 7 times higher when compared with the four states with the fewest guns. And most accidental shootings, happen to young people who have been shot by a friend or a family member. As a mother, I worry about this.

I sat down with Amy after the class was over. She’s the woman who works overnights at a gas station. We’re both women who want to protect ourselves. So, what were her thoughts? After 16 hours of class and hitting a few targets, was she ready?

“I think I would do probably four, five more sessions probably a more private one-on-one training just to get really used to it,” she said. “I probably won’t conceal to carry as soon as I get that until I’m really, really comfortable with having it on me myself… like the nervous part of it, you know, being like ‘oh my gosh I’ve actually got it on myself.’ Feeling paranoid would probably the biggest part of it.”

And she’s not alone.  If I was approved to carry a gun, I would want to spend more time in the firing range.  But knowing how to use a gun and actually doing so are two different things.  Speaking for myself, I’m unsure if morally I’ll ever be ready for that responsibility. And maybe, that was whole point of the class.

High school students from across the St. Louis region took part in another day of action Friday to call for improved school safety and tighter gun control measures.

The protest fell on the 19th anniversary of the school shooting at Columbine High School in Littleton, Colorado, where 13 people were killed. Many consider that event the moment when mass school shootings entered Americans’ consciousness. The Feb. 14 shooting in Parkland, Florida, has rocketed student activists to the center of the debate over guns.

Repeal The Second Amendment? That's Not So Simple. Here's What It Would Take

If you've lived in America, you've heard those words spoken with feeling.

The feeling may have been forceful, even vehement.

"Why? The Second Amendment, that's why."

The same words can be heard uttered in bitterness, as if in blame.

"Why? The Second Amendment, that's why."

Or then again, with reverence, an invocation of the sacred — rather like "the Second Coming."

'This is our future’: How youth activism is influencing various social movements

Since the fatal shooting of students in Florida in February, many young activists have organized walkouts, rallies and calls to action. On March 24, young people all over the country will take to the streets again in a nationwide rally they’re calling “March For Our Lives.”

On Monday’s St. Louis on the Air, host Don Marsh talked with local students involved in myriad causes they are passionate about to discuss youth’s role in activism.